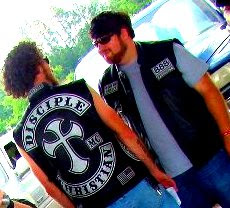 In the biker world its all about respect. What did you say to me!? Do you know who I am!? You can say the wrong thing to the wrong guy and end up in a lot of hot water. In the Christian biker world, it isn't much different. I wont go into details, but suffice it to say that in some states, no Christian club can wear an MC patch, because of what some guy did years ago that another club took as disrespect.
As well, there is a tragic history of Christian clubs breaking up, splitting off, fracturing or ceasing to exist at all, just over what one bro said to another, or how one bro took offense to something. That is a crying shame.
The Bible says in 1 Corinthians 13 that we Christians should not be easily angered, or keep a record of wrongs suffered. If someone says something out of line and you get all offended, the Bible indicates that you are an immature person. That's heavy.
So what should you do if you are offended by something someone does? The Bible says in Matthew 18 (copied below) that you talk to that person. Very often such things end in a 'sorry bro, didn't realize that offended you, i wont do it again". If they wont listen to you the Bible then says you go to them with another brother, and if they wont listen to you then, you take them to the elders of the church.
Lets contrast this with how things often happen in the real world, and how this destroys motorcycle clubs. In the real world, when we take offense, we don't talk to the person who offended us. Instead, we go around to our closest bros and tell them about what made us mad. We see who we can get on our side. We build it up and build it up in our own minds, playing it over and over until it becomes a big deal and there is no turning back, or hope of reconciliation. We try to turn others against that bro, we spread rumors, gossips and half truths until everyone knows that we are dissatisfied. This is how many friendships and motorcycle clubs have been broken up.
If this is how you operate, the Bible says you are not mature, you are operating out of ignorance and spreading dissension among brothers. The Bible says in Proverbs 6 that God sees spreading dissension among brothers as an abomination, a word reserved for the worst sin imaginable. However, the good thing is ignorance can be fixed!
When you find yourself offended by someone take these steps:
1. Pray for forgiveness in your heart toward that brother.
2. Genuinely pray that brother receives a blessing.
3. Go to that brother in sincerity and tell them you were offended and how. Give them a chance to see it from your perspective, and apologize. Take the opportunity to see if from their perspective.
4. If you feel there is no resolution, follow the Biblical step of taking it to ONE other brother.
5. If that brother and you feel its needed, take it to all the bros.
Finally, remember that you are Biblically OUT OF LINE if you go talking to all the other brothers BEFORE you have taken these steps, and you will be in sin against God for doing so. Love for the brothers is first and foremost. If you see a brother who is out of line with this, you need to stop him and correct him, and not allow him to sow division in you, or in any other bros.
READ what the WORD Says:
Matt 18:15 If your brother sins against you, go and show him his fault, just between the two of you. If he listens to you, you have won your brother over. 16 But if he will not listen, take one or two others along, so that ‘every matter may be established by the testimony of two or three witnesses.’ 17 If he refuses to listen to them, tell it to the church; and if he refuses to listen even to the church, treat him as you would a pagan or a tax collector.
18 “I tell you the truth, whatever you bind on earth will be bound in heaven, and whatever you loose on earth will be loosed in heaven.
19 “Again, I tell you that if two of you on earth agree about anything you ask for, it will be done for you by my Father in heaven. 20 For where two or three come together in my name, there am I with them.”
21 Then Peter came to Jesus and asked, “Lord, how many times shall I forgive my brother when he sins against me? Up to seven times?” 22 Jesus answered, “I tell you, not seven times, but seventy-seven times”.