In today's church there has been a rush to explain Jesus as a caring, sympathetic, good man, which is all true. But somehow in our minds eye perhaps it's come about that Jesus is a long haired, kind of pot smoker looking hippie in sandals, who pretty much chills out and doesn't judge anybody, likes children, is okay with being smacked across the face and turning the other cheek, and is, for lack of a better term, a sissy. And perhaps a lot of bikers assume if they accept Jesus they have to become a sissy too.

While I understand the urge to make Jesus watered down for the masses, I couldn't disagree more.

Jesus is a man's man. Jesus suffered torture without a word. That's gangsta. He is described as a carpenter, and the Greek might even include the word stone mason, it's not like there were a lot of big trees around Jerusalem. I imagine Jesus as a fairly strong guy with rough hands accustomed to taking splinters. He hung around with fishermen, also barrel chested strong guys dragging up giant nets with heavily calloused hands. And of course who cusses a lot, if not a sailor? Jesus hung out with guys like Peter, who whipped out his sword and cut off the ear of the guy who came to arrest Jesus. Somehow I doubt Peter was aiming for the ear.

And the whole bit about turning the other cheek, you have to look at that scripture in context (Luke 6:29). The context is loving those who hate you, not seeking revenge. Its talking about Roman law where you have to carry a Roman soldiers gear for a mile if he asks you too, and Jesus says you should go the extra mile. Jesus was suggesting that we obey the law of the country we live in , not just the letter of the law but the spirit. A Roman soldier by Roman law had the right to smack you across the face.

But Jesus didn't put up with being smacked across the face! When the officer slapped Jesus across the face prior to his crucifixion (John 18:23), Jesus is NOT recorded as having turned the other cheek and asking for another one, instead he stands up for himself, and says why smitest thou me? In our vernacular that's "What's up?! Why did you do that!?"

I don't believe for a minute that Jesus is suggesting we allow people to walk all over us, transgress our boundaries, disrespect us and continue to do so.

There's a popular meme that goes around the internet that says: When someone asks you what would Jesus do, remember that getting a whip and driving people out of the church is within the realm of possibilities!

That's the Jesus I think of!

Jesus is into protecting the poor, the needy , the children. This is exactly the kind of thing bikers are into. Think about how Jesus would treat people who mess with children. He says it would be better for them to have a millstone be tied around their neck and the be thrown into the sea! So basically drowning. Now notice that we don't see examples in the Bible of Jesus going round and drowning child molesters, and this paragraph is certainly not an invitation for you to do so. But I do want you to understand that grieves the heart of Jesus that these things happen, and it grieves Him if they have happened to you. I want you to see that Jesus feels the same way about these things that you and I do.

The Bible is full of examples of people defending themselves from unjust situations, and not putting up with violence and abuse.

In Luke 22:36 Jesus and his disciples have a conversation about buying swords, which is commonly understood as need for self defense. Exodus 22:2 describes the use of lethal force defending yourself in your home from a thief. Ezekiel 33:6 talks about defending the lives of others, as does Genesis 9:5-6. Life, liberty and the freedom to defend yourself from attack are important to God.

Now none of this is saying that you should go around being a violent person, popping people in the mouth, using your right to self-defense improperly, losing your temper to intimidate people, or breaking the law. In fact the Bible specifically speaks against that. Proverbs 3:31-32  Do not envy a man of violence, And do not choose any of his ways.  32 For the crooked man is an abomination to the LORD; But He is intimate with the upright.

We also have to be clear that murder, the pre meditated taking of someone's life out of anger or revenge is wrong. When we are wronged by others, we can turn to God for vengeance. Rom 12:19 Never take your own revenge, beloved, but leave room for the wrath of God, for it is written, "Vengeance is Mine, I will repay," says the Lord. And really, God can get 'em better than you can!

My goal in writing this chapter is that you understand there is a biblical balance between being caring and forgiving, and realizing that it's okay to be a rough and tumble man. Jesus was a tough guy, and He hung around with tough guys. The men of the Bible were tough men, and knew how to take care of themselves. Just because you get saved doesn't mean you become a sissy! Remember that sissy Jesus does not exist! When you get saved you still are who you are, you're just making a commitment to be forgiving, loving and caring wherever possible. And when the time comes to take care of business, you still have that right, too.

Perhaps like me you carry a concealed firearm legally, everywhere that you're legally allowed to. At some point when you made the decision to do so, you had to weigh in your mind what it means to carry a gun. It's no small matter. I'm sure that like me you hope to never use that gun for anything other than target practice. But somewhere inside of you you've made a decision. When the time comes, if the time comes, you're prepared to defend your family, your life, your liberty. This is in no way contrary with the teaching of the Bible.

Certainly no one wishes to use lethal force, not soldiers, not police, not civilians, not any reasonable rational person. There is nothing pleasant in the experience of taking someone's life. Rather it will haunt your dreams, it can cause misery for years to come, both personally in your mind, and legally in your life.

Be serious, be sober mind. Be aware of the law, and the right thing to do. And be prepared. Turning your life over to Jesus does not mean that you become a sissy. The Jesus you serve is the same one found the Revelations 19. And he's pretty hardcore.

Revelations 19:11And I saw heaven opened, and behold, a white horse, and He who sat on it is called Faithful and True, and in righteousness He judges and wages war.
12His eyes are a flame of fire, and on His head are many diadems; and He has a name written on Him which no one knows except Himself.
13He is clothed with a robe dipped in blood, and His name is called The Word of God.
14And the armies which are in heaven, clothed in fine linen, white and clean, were following Him on white horses.
15From His mouth comes a sharp sword, so that with it He may strike down the nations, and He will rule them with a rod of iron; and He treads the wine press of the fierce wrath of God, the Almighty.
16And on His robe and on His thigh He has a name written, “KING OF KINGS, AND LORD OF LORDS.”

Sissy Jesus Does Not Exist http://disciplecmcblog.blogspot.com/2014/02/sissy-jesus-does-not-exist.html 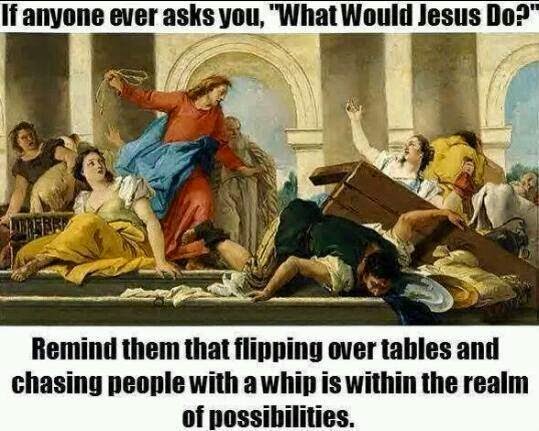